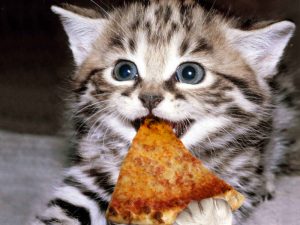 I ask you, who wouldn’t click on that link, right? I could have tried to grab your attention with something like “Adolescent felines and their preference for dairy products and tolerance to gluten”, but I don’t believe it would have the same effect.

I learned something this week that I want to share with you and use as an illustration.

Last week I posted a well-researched, thoughtful blog regarding public speaking. I even gave it an interesting title (Death by Public Speaking). The result was a hand-full (less than five) people read it and commented or liked it.

A couple of days later, I did something I very rarely do. I posted a photo of a pizza that I made on facebook. I like making pizza and I am pretty good at it. This particular one came out of the oven looking spectacular. Gorgeous browned bubbling cheese, great crust, the works. So, as I said, I was inspired by my creation and I took a picture and put in on facebook.

Let me tell you, I got so many likes and comments I can’t get it to stop showing up on my facebook page. Don’t get me wrong, I’m flattered by the accolades regarding my culinary prowess, but it did get me thinking a bit.

First of all, my audience, facebook in this case, isn’t really the prime group to whom I should be promoting my blog post.

Second, when I mentioned what had happened with my two postings to others, they were quick to remind me that facebook is for kittens and pizza, as well as other cute animals and food. Facebook is seldom the vehicle for philosophical discussions and reasoned debate.

All of this brings me to my point (aren’t you glad I finally got there?). My point is that there is one over-riding consideration when building a presentation, speech, elevator pitch, or preparing for a meeting. Your audience!

Let me give you an example. If you are speaking to a group of environmental engineers who specialize in air quality control, you’ll be using terms like SOx and NOx and particle size and emissions and best practices, etc. That’s good for that audience. However, if you’re speaking to a group of non-technical folks about the hazards of poor air quality and the need for all of us to be aware of the issues, your presentation will be totally different.

Let me give you another example. I was working with a gentleman who is in the admissions department of a local ivy-league school. Part of his job was to provide an hour-long presentation to would-be students. He had approximately sixty powerpoint slides that he wanted to get through in his one hour time slot before the kids were taken on a tour of the school. As you may imagine, he was having a lot of trouble getting through that number of slides in the time he had. So he asked me to help.

The first thing I did was sit through the presentation. It had a lot of pictures of different buildings on campus and he would speak about each one when come up.

After he finished, I asked him one question “What does the average young person who sits through your presentation want to know?” He quickly said “Oh, that’s easy. They all want to know how to get accepted into the school”. I then asked him how many of his slides addressed this question. We came up with six.

He wasn’t practicing Audience Centered Communication. This is often defined as “…a type of communication where a speaker analyzes the audience to determine the content, language usage and listener expectations. It allows effective communication because the speaker can tailor messages to the needs of the listener”.

In my next post I’ll get into this in a lot more depth. However, for right now, remember – it is always about the audience.