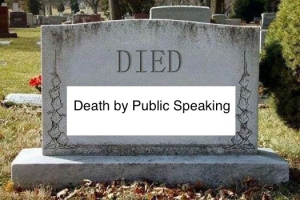 Many people think that FDR uttered these words in response to the attach on Pearl Harbor. Not so. This quote actually comes from his 1933 inaugural address. He was referring to the mood in the nation regarding the ongoing great depression. Part of the common consensus was that the populace was afraid to spend, and this in turn was complicit in keeping the country mired in their current situation.

As posted in “enotes”, Roosevelt was concerned that fear had paralyzed Americans from “taking the positive steps needed to pull the nation out of the great depression. He was explaining that the people’s fears were contributing to the bad outcomes that they feared – sort of a vicious cycle”.

According to science.howstuffworks, “fear is a chain reaction in the brain that starts with a stressful stimulus and ends with the release of chemicals that cause a racing heart, fast breathing and energized muscles, among other things, also known as the fight-or-flight response”.

There are lots of ways to be scared. The one that I’m interested in today is “cued fear conditioning”. You can read some pretty complex scientific studies such as “Contextual Fear Conditioning in Humans: Cortical-Hippocampal and Amygdala Contributions”, but I wouldn’t bother. The bottom line? We get scared in certain situations, even if there isn’t anything to be afraid of.

It is this fear that can keep us “mired in our current (business) situation” and prevent us from moving forward and experiencing the type of success we’re looking for.

There are basically three “stages” of fear. The first thing we do is freeze. This is the evolutionary response designed to keep us hidden from the potential predator we sense near us. The second thing that usually happens is we want to run away. If we’ve already been spotted, the adrenaline coursing through our bodies helps us run away quickly. Finally, if freezing or running doesn’t get us out of harms way, that same adrenaline helps us fight off — or at least try to fight off — whatever threat we’re facing.

So, what happens when someone finds themselves in one of these public speaking situations. Well, we’ve all seen it. The first thing that they do is freeze. This seldom works because usually, in a social situation, there is nowhere to hide (unless the rest room is near-by).

Next, the frightened would-be speaker starts looking around, frantically trying to figure out if it’s possible to simply run away. However, in that same social setting, this is usually not an alternative (although that rest room may still be option).

As for the third response, I personally have never seen a person trapped in a public speaking situation take to fighting their way out of the room, but I guess it could happen. Although social convention would probably prohibit it.

In my opinion (worth every penny you’re paying for it right now), no one is born with the fear of public speaking. To support my contention, I ask you to look at any 3 or 4 year old. They are pretty much always looking to be the center of attention. “Look at me! Look at me!”

However, somewhere along the line, many of us get conditioned to associate the center of attention situation with something to be feared. Perhaps some adults reprimanded us for interrupting. Perhaps our peers made fun of us. Maybe we failed at whatever it was and everyone laughed at us; or it could be a combination of all sorts of things. All I know is that once that fear response is triggered, and all the chemical responses to fear start to cascade through our brain and the physical manifestations take over, we’re in trouble.

When the fear of public speaking hits, all of your best plans seem to be forgotten. If you have memorized your presentation (not recommended), it flies right out of your head and you are left frozen in place. If you are relying on cue cards, your hands and your voice start to shake (there is the adrenaline kicking in), you lose your place or never find it.

If your plan focused on speaking very slowly, … well this might actually help. Think about what happens when you force yourself to slow down. Everything around you slows down too. That big dose of adrenaline flowing through you has nothing to do and it starts to taper off. Your hands stop shaking (at least so much), and you’re able to shuffle those cue cards a bit better.

Alright, by slowing down, we are starting to get a handle on it. When I was going through speak therapy as an adult, all of my “fear cues” were really firmly entrenched. I could see the stutter coming and there was nothing I could do about it. I just knew that I would stutter on that word, and sure enough, I would. I could change the word, but if I needed to buy blue paint, well, think about it. How do you tell the person at the hardware store that you need blue paint without telling him you need blue paint? Believe me, I’ve tried. It’s horrible and you look like an idiot.

One of the best tools I learned to use in speech therapy was the trick (although I hate to use the word “trick”) of simply slowing down. How slow? As slow as you need. Could you look a little bit foolish? Not really. Especially if all of your presentation or speech patterns are slowed down; and the neat thing? Once you get rolling and the confidence kicks in, you’ll find yourself speaking a bit quicker – but don’t worry. If the nerves start to act up again, you can always take a deep breathe and slow down again.

Will this solve everything? Of course not. There are many more things you may need to work on to boost your confidence level. Things like focusing your message, learning to listen, using various vocal tools like tone, pitch, pace (there is that slow talking trick again), volume, pausing; the list goes on.

I hope this helps. If you want to explore your public speaking needs a bit more, reach out and let’s have a conversation. I’ll speak slowly. And I can truly say that I have never heard of anyone who died from public speaking.